Intelligence is wonderfully interactive. Our brain isn't just different compartments. In fact, creativity - which I define as the process of having original ideas that have value - more often than not comes about through the different disciplinary ways of seeing things.
Posted by Lit Hum at 6/30/2010 No comments:

Oscar Wilde‏ on the monstrous worship of facts

Our problem, then, is too strict an insistence on the truth. Relentlessly champion accuracy and you kill the imagination. Insist on proof at every turn and conversation becomes verification. The monstrous worship of facts sucks the beauty out of art, and would abort all pregnant possibilities. Without lying, there is no human interaction at all, just an exchange of data as if we were machines.
Posted by Lit Hum at 6/30/2010 No comments:

Teaching dramatic writing isn’t like instructing someone how to ride a bicycle or mend a broken pipe. Writing is unique and idiosyncratic, a deeply personal form of communication. It’s informed by not only the past and present, but by one’s identity, imagination, values, aesthetics, politics, sense of humor, appreciation of tragedy. At the same time, good writing demands not just aptitude; it requires intense discipline, resilience, openness, and patience. It takes bravery, a clear eye, and heart. As a teacher, I try to encourage personal expression while reinforcing the discipline of craft. I help students identify and clarify their voice and the story they’re trying to tell. At the same time, I teach them the basic tools of dramatic writing and how to use (or perhaps even subvert) them: structure, plot, character, action. How do you shape a play, anyway? Or a screenplay? How do you maximize the potential of the stage or screen? Most of all, I try to empower all my students to open up to the vast creative potential within them, and to help them find its best expression.
Posted by Lit Hum at 6/30/2010 No comments:

He had to paint, and he did...his self-attacks and self-doubts slowed him down. He painted best when he felt good...it was as if his self-hatred fueled as well as suffocated him. Perhaps he needed the challenge of doing something against great and impossible odds in order to do anything at all. He needed debility aas a foil to radiance. Over and over his attacks sought to cancel him out and he emerged with fresh vision. He lived the rebirth archetype...he needed to break himself down in order to begin freshly and nakedly.
Posted by Lit Hum at 6/30/2010 No comments:

Nothing is as complete as a broken heart?

“Feel broken for your errors, and you are on your way to redeeming them. ‘Nothing is as complete as a broken heart,’ says the Rebbe Yosef Yitzchak. The first step to healing and growth is humbly recognizing that you are broken. If you feel complete when you really are not, you are truly broken. When you are aware that you are broken, then you will look for ways to repair yourself…not a demoralizing feeling of being broken, but an uplifting one that motivates us to heal, grow and become greater than before.” – Simon Jacobson
Posted by Lit Hum at 6/30/2010 No comments:

Human flourishing is not a mechanical process, it's an organic process. You cannot predict the outcome of human development, all you can do is, like a farmer, create the conditions under which it will begin to flourish.
Posted by Lit Hum at 6/29/2010 No comments:

A woman's son died. In her grief, she went to the holy man and said, "What prayers, what magical incantations do you have to bring my son back to life?" Instead of sending her away or reasoning with her, he said to her, "Fetch me a mustard seed from a home that has never known sorrow. We will use it to drive the sorrow out of your life." The woman set off at once in search of that magical mustard seed. She came first to a splendid mansion, knocked at the door, and said, "I am looking for a home that has never known sorrow. Is this such a place? It is very important to me." They told her, "You've certainly come to the wrong place," and began to describe all the tragic things that had recently befallen them. The woman said to herself, "Who is better able to help these poor unfortunate people than I, who have had misfortune of my own?" She stayed to comfort them, then went on in her search for a home that had never known sorrow. But wherever she turned, in hovels and in palaces, she found one tale after another of sadness and misfortune. Ultimately, she became so involved in ministering to other people's grief that she forgot about her quest for the magical mustard seed, never realizing that it had in fact driven the sorrow out of her life. (via Harold Kushner)
Posted by Lit Hum at 6/28/2010 No comments:

The only thing that separates the writer from others—and, far from making him or her a better or wiser person, let alone a more amenable one, as it redoubles the force of solitude, 'one’s ultimate hard irreducible inorganic singleness'—is that the reading of a poem, or the pondering of a crucifixion, becomes an event. Not a diversion, a flight, or a release from chores but an experience no less transformative than a day in bed with a lover. - Samuel Beckett
Posted by Lit Hum at 6/28/2010 No comments:

3 giants who had another view of fame

"If fame belonged to me, I could not escape her." - Emily Dickinson
"...the venom of renown." - Wallace Stevens
"Fame is like shoving the wrong end of a cigar in your mouth." - Vincent Van Gogh
Posted by Lit Hum at 6/28/2010 No comments:

The point is that to make imagination speak like this in the face of despair about life is to perform an action that is as much a part of life as any other, and is therefore, in the most paradoxical-seeming way, an act of faith. More than that, Buchner's alternative to history - which is what imaginative art might be thought of - constitutes his triumph over the very forces that on the level of sheer physical experience cause him to despair. In writing his plays, Buchner added to life a new fact which is both a recognition of disaster and a cure for thinking it all there is. Like the classic writers of tragedy, he leaves us not in despair but in possession of a means for confronting what would otherwise have killed us behind our backs. - Richard Gilman
Posted by Lit Hum at 6/26/2010 No comments:

The Coordination of everyday perception with fantastic experience is one of our fundamental developmental tasks...in normal circumstances, our I-feeling waxes and wanes. It shifts in intensity and quality, seeming to vary from moment to moment like barometric pressure. In states of absent-mindedness or creative absorption, it may fade for a moment. It may grow keener when caught in conflict. In the case of prolonged psychic stress, it can become numb and die out. In physical illness, I-feeling may contract to exclude the body. In health on a sunny day after a swim, it may include not only the body, but the entire universe as well. - Michael Eigen 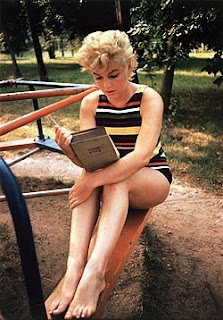 The 1st Abstract Expressionist & Theatre of the Absurdist? 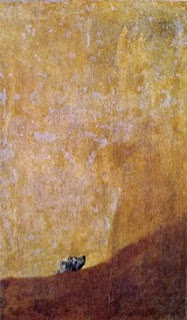 “All I know is I’m losing my mind,” Franny said. “I’m just sick of ego, ego, ego. My own and everybody else’s. I’m sick of everybody that wants to get somewhere, do something distinguished and all, be somebody interesting. It’s disgusting – it is, it is. I don’t care what anybody says.”

Lane raised his eyebrows at that, and sat back, the better to make his point. “You sure you’re just not afraid of competing?” he asked with studied quietness. “I don’t know too much about it, but I’d lay odds a good psychoanalyst – I mean a really competent one – would probably take that statement – ”

“I’m not afraid to compete. It’s just the opposite. Don’t you see that? I’m afraid I will compete – that’s what scares me. Just because I’m so horribly conditioned to accept everybody else’s values, and just because I like applause and people to rave about me, doesn’t make it right. I’m ashamed of it. I’m sick of it. I’m sick of not having the courage to be an absolute nobody.” (from Franny and Zooey)
Posted by Lit Hum at 6/24/2010 No comments:

"What makes a human being make a poem? Why does the language we employ every day—language suited equally as well to thank-you notes or parking tickets—ask to be liberated from its more workaday chores, its rhythmic vitality threatening to overpower its capacity for plain sense? Why do readers enjoy the feeling of being overpowered? We don't reread great novels or poems because we can't remember the story; we reread because we want to feel our familiar world becoming strange again." - James Longenbach
Posted by Lit Hum at 6/24/2010 No comments:

"Eccentricity has always abounded when and where strength of character has abounded; and the amount of eccentricity in a society has generally been proportional to the amount of genius, mental vigor, and moral courage which it contained. That so few now dare to be eccentric, marks the chief danger of the time." (On Liberty)
Posted by Lit Hum at 6/21/2010 No comments:

"...intelligence comes to life when a kind of empathy and imagination is stirred by a new vision of things: intelligence alone does not generate new vision, and bare argument does not on the whole change things; but vision displayed in new forms of human life and engagement can renew intelligence..."
Posted by Lit Hum at 6/21/2010 No comments:

All desire to protest, to preach, to proclaim an injury, to pay off a score, to make the world the witness of some hardship or grievance was fired out of him and consumed. Therefore his poetry flows from him free and unimpeded. If ever a human being got his work expressed completely, it was Shakespeare. If ever a mind was incandescent, unimpeded, I thought, turning again to the bookcase, it was Shakespeare’s mind.
Posted by Lit Hum at 6/21/2010 1 comment:

It’s perfectly impossible for me to define anything about him or about what he taught, but it was a matter of getting frequent and infinite vistas of perfection in beauty, strength, symmetry, greatness—and the reasons for them, in poetry and in living….That sounds extravagant—well, his power over people was extravagant, and almost unlimited. Everyone who knew him was left in a clear, tingling daze.
Posted by Lit Hum at 6/21/2010 No comments: