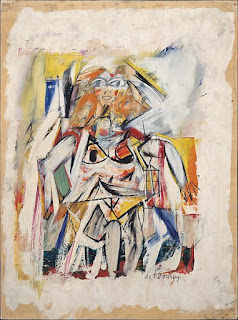 “Content… is a glimpse of something, an encounter… like a flash,” de Kooning told the critic David Sylvester in 1960. Who has described the spirit of his paintings better? Truth for him was fluid, protean. Just as he refused to be pinned down ideologically by the influential theoreticians of his day like Clement Greenberg, de Kooning’s paintings refuse to be defined as either “representational” or “abstract,” flitting restlessly between these notional polarities. Considered a virtuoso both by peers and successors, he wasn’t merely an acrobat with the brush; he was also, and more profoundly, an acrobat with the semantics of painting, playing the medium’s possibilities against one another to keep them open. It’s a thrilling and beautiful act to watch, a display of his intense desire to forge paintings from his own contradictions: his roots in the European Old Masters and his acquired taste for American pop culture; his careful craft and bold innovation; his architectonic intelligence and madcap improvisation; his grace and his violence; his ebullient confidence and corrosive self-doubt.

A small work on paper (mounted on canvas) in the show, Woman (1953), succinctly performs this splicing of opposites. The iconic figure, nearly centered on the page, is a monumental Venus of Willendorf, but her breasts are the teardrop eyes of an angry Mickey Mouse. No other painter of de Kooning’s generation makes it so hard to separate high art from low comedy. More than his painterly flourishes, it’s this embrace of contradiction that has made his work a source for generations of later artists, from his immediate successors, who included also Cy Twombly, Roy Lichtenstein, Jack Whitten, and Gerhard Richter, to contemporaries such as David Reed, Christopher Wool, Joyce Pensato, and Amy Sillman. All of these artists have mined de Kooning’s work for elements suited to their own purposes. That variety of interpretation is only possible because the vein itself is so rich. - Stephen Ellis
Posted by Lit Hum at 8/01/2019 No comments: