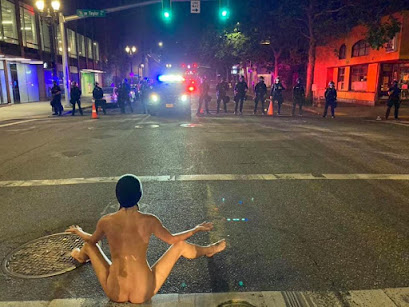 Wow. Portland. Her. From time to time the mythic emerges and is captured in iconic form. Behold the Divine Feminine in all Her glory. Unadorned. Unprotected. Interrupting the banalities of evil. Spreading awe. Vulnerability ~ the only power strong enough to threaten fascism. She appeared as if out of nowhere and approached the blockade fully nude looking at the stunned officers. She pointed at them silently. The police and the feds didn’t hesitate to shoot  back with rubber bullets. A protester with a shield appeared also as if out of nowhere covering the woman briefly from police fire. She began to make slow yoga-like poses, then sat down. She sat there fully naked legs open, gazing at the officers. Using her pussy riot power and white woman privilege to the epic degree. Bewildered, as if outnumbered, the military line eventually dispersed. One day this will become one of the iconic images of the 21st century. Among these others. The Feminine Rising. It’s no instagramable goddessy bullshit, it’s leaning into good trouble, it's the uprising of the unprotected, it’s the kind of love that disrupts injustice, it’s the naked against the machine in the middle of the night. It’s putting everything on the line. Here She is. - Vera de Chalambert
Posted by Lit Hum at 8/03/2020 No comments: